If you’re looking for something fun to do close to home, the NBA’s G-League is a great option for a cheap night out.

The G-League (formally the D-League/Developmental League) is the official minor league of the NBA. NBA teams are assigned a G-League affiliate where they can staff a team with young prospective NBA talent to develop their skills in hopes of getting a call-up to the NBA.

Major League Baseball (MLB) has a successful minor league system and the NBA is doing its best to mirror their model. The NBA has placed affiliate teams in nearby markets to serve as a launchpad for many players looking to join the professional basketball ranks. Unlike in baseball where you have Single-A, Double-A and Triple-A ball, the G-League has just one tier of teams.

The Hustle are affiliated with the Memphis Grizzlies, which makes all the sense in the world, considering they are just a short trip over the state line.

Lower-level tickets start out at $12 and the most expensive ticket is about $25– much more palatable than the prices you pay at the NBA level in the FedEx Forum.

The Hustle have a great roster this season, featuring a mix of players with regional ties and ties to the Grizzlies. The team is coached by Brad Jones, who played and coached at Lambuth University in nearby Jackson, Tenn. and later served as an assistant coach for the NBA’s Utah Jazz. 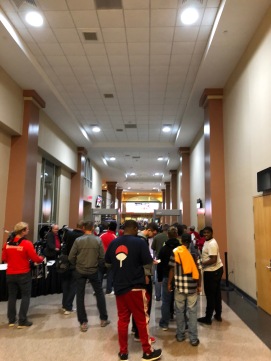 I recently attended the Hustle’s opening night on Nov. 9 at the Landers Center in Southaven and had a great time.

Some things to keep in mind if you decide to attend a Hustle game:

Opening night for the Hustle happened to also coincide with the season’s first Kids Club, which is an area on the floor with interactive inflatables for the kids, a team store and more. You can sign up for the Kids Club for free and you receive a free ticket to a Hustle game, a kids lanyard and your kid gets to shoot some layups after Friday night games.

The game is action packed, physical and uptempo.

The in-game experience is on-par with an NBA game. The players are highly skilled and don’t take any plays off. They are all fighting for the right to be on an NBA roster. This game featured all the action you would expect from an NBA game: breakaway dunks, alley-oops, put-back dunks, crazy three pointers and show-stopping blocks.

The pep squad, for lack of a better name, throws out t-shirts during time outs, interacts with fans with trivia during the game and more. The usual in-game music and chant music is pumped into the arena during the game as well.

There was even a halftime performance from a world-record holding juggler who could juggle everything from bowling pins, to flying discs to tennis racquets. It was impressive. 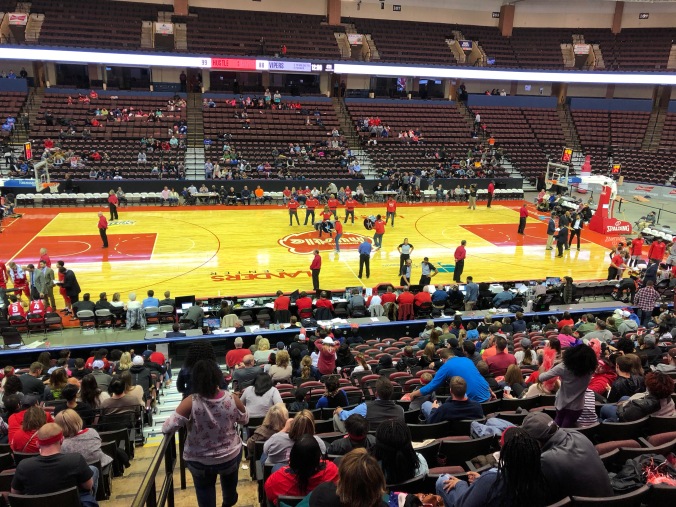 Besides the great game play and great ticket prices, the concession prices were price conscious, too.

Much of the menu was no more than $6 bucks, which featured pizza, chicken wings, hot dogs, nachos– the standard concession food. Plus plenty of snacks, soda, candy and beer. A refillable soda cup is $6, which is good for unlimited soda refills.

Since this was my first game, I cannot say for certain if this happens regularly, but Grizzlies General Manager Chris Wallace was in attendance for opening night, sporting a crimson sports jacket and sitting under the basket near the Hustle’s bench.

Grizzlies head coach J.B. Bickerstaff also made an appearance at the game later in the first half, sitting on the other side of the goal as Wallace. Former NBA champion (with the 2004 “bad boy” Detroit Pistons squad) and 2008 gold medalist Tayshaun Prince was also spotted at the game court-side. Prince is now a front office executive with the Grizzlies.

After you’ve been to one game, if you’re like me, you’ll be looking forward to the next Hustle game. If it happens to be a game you can’t make or a road game, some Hustle games are broadcast on Facebook Watch and on ESPN’s new premium streaming service, ESPN+. You can check out the team’s full schedule and broadcast schedule here. At least two Hustle games will be broadcast on traditional television on NBATV and on ESPNU later this season.